Hilda came to our farm just shy of her second birthday.  She was purchased from a farm in another state where she was a working guardian.  Her weight and coat were poor.  However, she was Duke's full sister and littermate – I figured she would be something special.  I was right.

She had not been socialized and she was 22 months old the first time she had a collar on.  She had to gain some weight, learn to walk on the leash, learn to ride in the car, and get used to those energetic little dogs called Border Collies.  She has a phenomenal temperament and takes everything in stride.  In June 2008 – just four months after arriving, she entered the show ring for the first time (at an indoor show no less).   In September 2008, she traveled to Atlanta for the National Specialty - she didn't win, but that's okay.  She handled marbled floors and elevators in the hotel, traffic - you name it - with style.

She has a beautiful face and head, nice structure, good bone, an excellent rear assembly and she moves very well.  She has nice reach and drive and her movement is clean and fluid.  She is a delight to have as a member of our household.  Hilda is very neat, clean and loves attention.   Like Duke, her hips are OFA Good.  She has my complete admiration as she is an excellent example of the Anatolian breed. 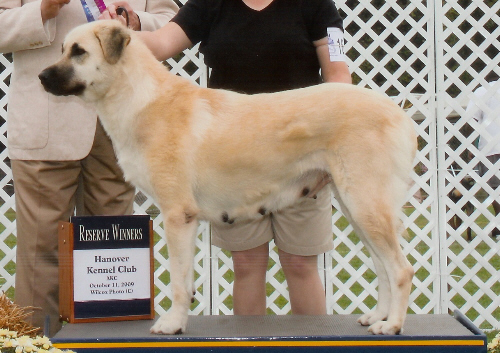 Hilda in Wilmington October 2009 - she came in second to her daughter, Ruya!!  (She had just shed her undercoat so it was a bad hair day!!) 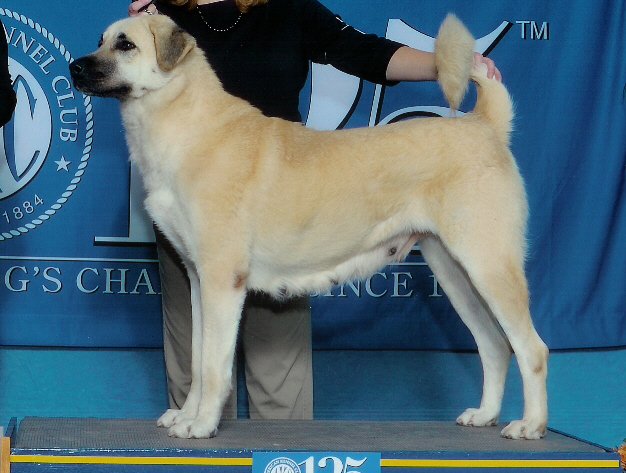